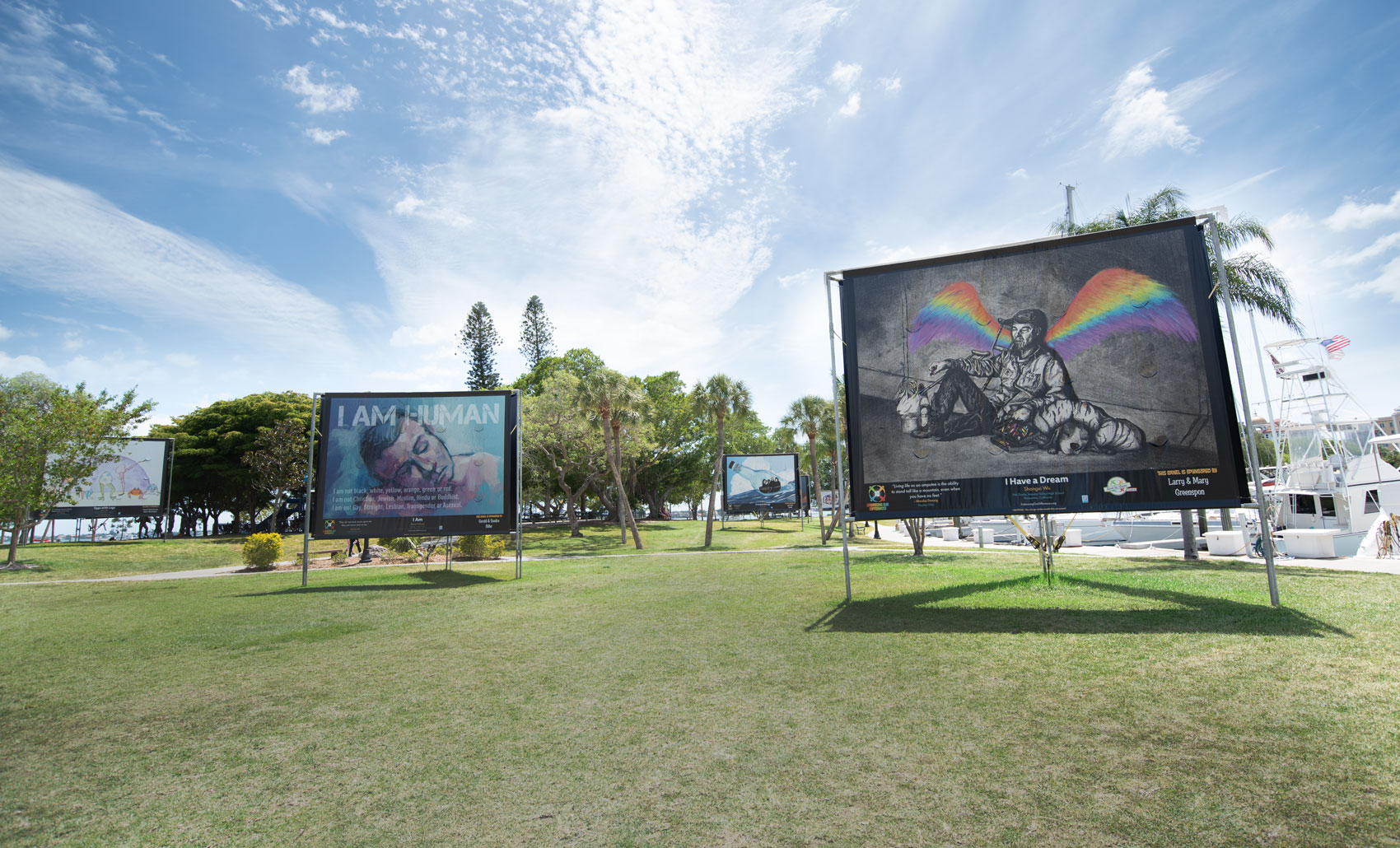 Embracing Our Differences is a not-for-profit organization based in Sarasota, Florida, that uses the power of art and education to expand consciousness and open the heart to celebrate the diversity of the human family.

Through the transformative power of the arts, we educate and inspire to create a better world. We envision a world that embraces diversity, respects differences and actively rejects hatred and prejudice.

We are very proud of the relationships developed with our Community Partners – each of which plays an integral role in the success of our programs. Without their support, our work would be impossible.

"If you stand by, then who will stand up?"

Letter from the Executive Director

The last nine months defy description. What’s the right adjective? Challenging? Unprecedented? Disruptive? Whichever word you choose, it’s an understatement. The pandemic and the struggle for racial justice have exposed serious fault lines in our society. We’re living in strange days—and many feel uncertain about the days to come.

But the future won’t wait. Ready or not—it arrives. To survive, you must adapt—and quickly. That’s exactly what we did.

To stay connected to broad audiences, we reimagined EOD’s educational outreach programs for virtual platforms. With direction from our education director, Ben Jewell-Plocher, and Brian Hersh, EOD’s liaison with the Sarasota County School District, we launched a series of easily accessible virtual programs and resources for families and teachers.

To further empower area educators, we’re also developing a series of instructional videos for students who wish to submit quotes and artwork for the 2021 exhibit. Finally, as we move closer to the date of our 2021 outdoor exhibit, we’ll be able to better determine if in-person visits by students and teachers are feasible. To prepare for every contingency, we’ve already planned a virtual exhibit tours program.

Reinventing EOD’s outreaches for online media is a massive effort. But thanks to vital grants from area foundations, including the Gulf Coast Community Foundation and the Community Foundation of Sarasota County, we completed it in a matter of weeks. Our efforts are also buoyed by dedicated area educators, high school student volunteers, board members, EOD Ambassadors, and all the sponsors, and volunteers who share EOD’s commitment to honor the complex spectrum of human potential and celebrate the differences that make each individual precious and unique. Thanks to your commitment, we can continue our mission—even in these strange days. 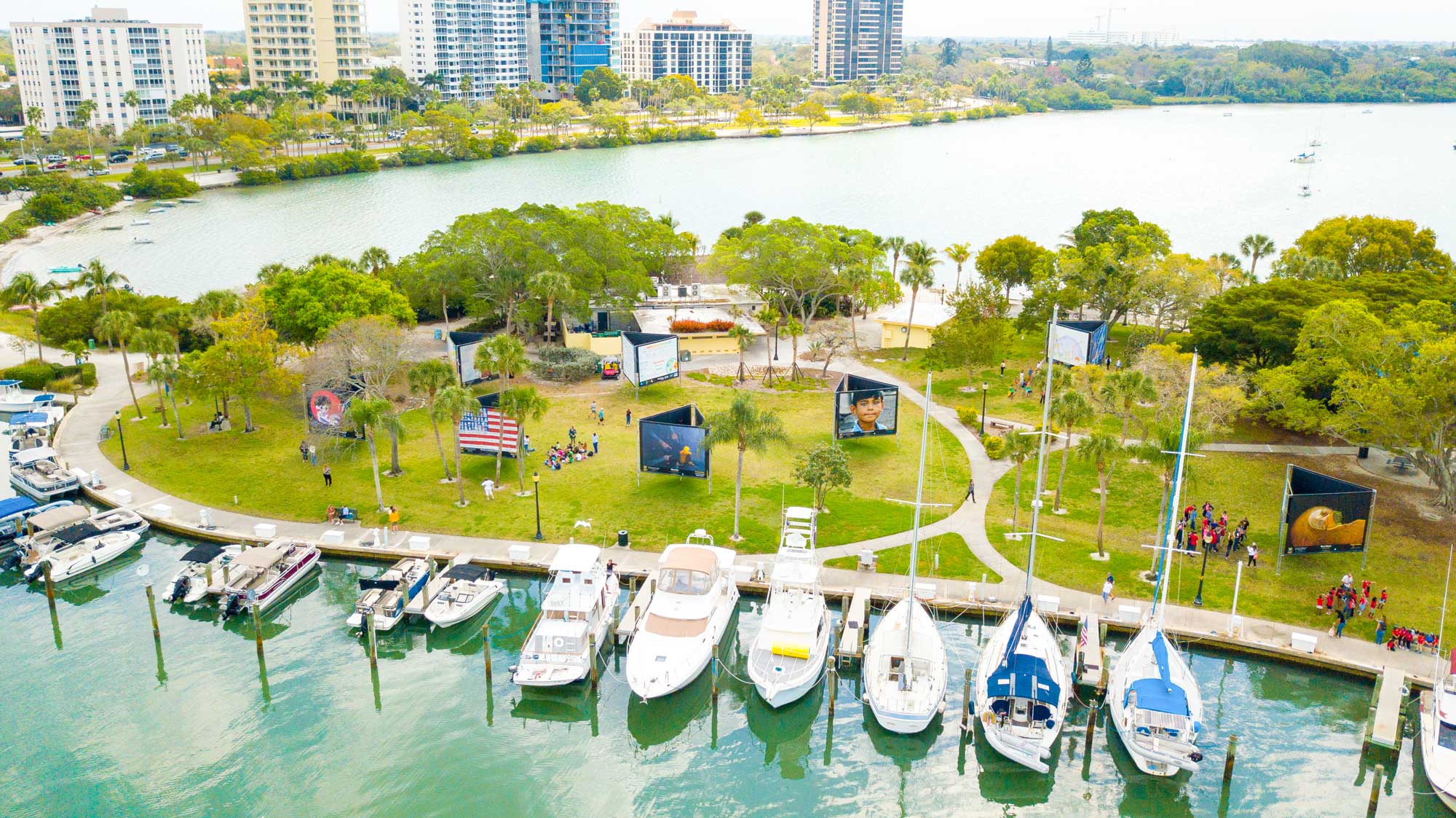 It is difficult to channel the ongoing outrage we feel. Words fall short and talk is cheap. It’s easy to sound glib or opportunistic. Silence is safer. But, as Dr. Martin Luther King Jr. said: “In the end, we will remember not the words of our enemies, but the silence of our friends.”

Black lives matter. That’s not an academic issue. It’s a matter of life and death. Racism kills. Institutional racism thinks it can get away with murder. All too often, it does.

That’s not who we’re supposed to be in this country. Diversity is the very fabric of the American experiment. When that fabric tears, people of color die. The body count goes back for centuries.

In 1619, the first African slaves were brought to America’s shores. Violence against their descendants has continued ever since, although it’s taken many forms. Laws have changed, but many white hearts and minds haven’t. Despite the Emancipation Proclamation of 1863, and the Voting Rights acting of 1964, white injustice against the African-American community is not a thing of the past.

Outrage is an understandable response to systemic injustice. But answering violence with violence is a futile tactic—and one that we must reject. Rioting, looting and destruction won’t change minds and hearts. Non-violent action in the tradition of Mahatma Gandhi, Nelson Mandela and Dr. Martin Luther King Jr. is the only thing that can.

The time has come to take a stand for peace and justice. But time is short, and history is unforgiving. Words aren’t enough. Belief in diversity, equality and civil liberty isn’t enough. We have to act—and act now. If we hesitate and fail to act, the alternative is too horrible to contemplate.

Are we going to have a civilization or a civil war? That’s not hyperbole. That’s what’s at stake. The value of human diversity is all that holds our nation together. And it’s what we stand for at Embracing Our Differences.

We can do better. We need to speak out against this brutality, persecution, and sickening injustice. We cannot remain silent.

“The ultimate tragedy is not the oppression and cruelty by the bad people but the silence over that by the good people.”

The centerpiece of Embracing Our Differences is a juried, outdoor art exhibit featuring 50 billboard-sized images created by local, national and international artists, writers and students reflecting their interpretations of the theme “enriching lives through diversity.” The exhibit welcomed 388,000 visitors this past year, bringing total attendance, since 2004, to more than 3.3 million. 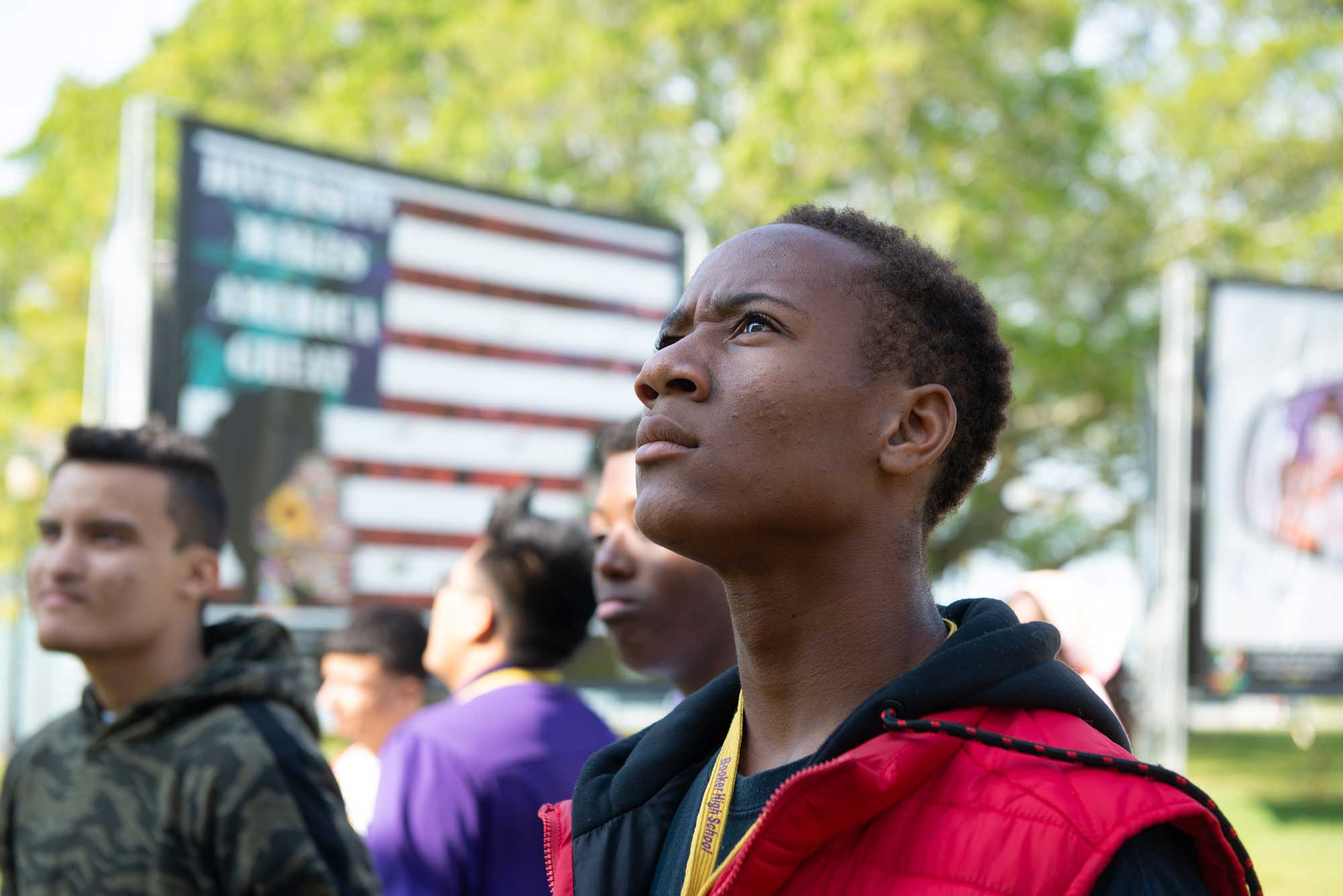 "The EOD exhibit, this year, is outrageously wonderful, relevant, impactful, hard, provocative, beautiful, strong, in your face great! It made me cry, more than once. Touched my heart and sensibilities."

"Love this! So meaningful and eye catching. Something to learn for all ages." 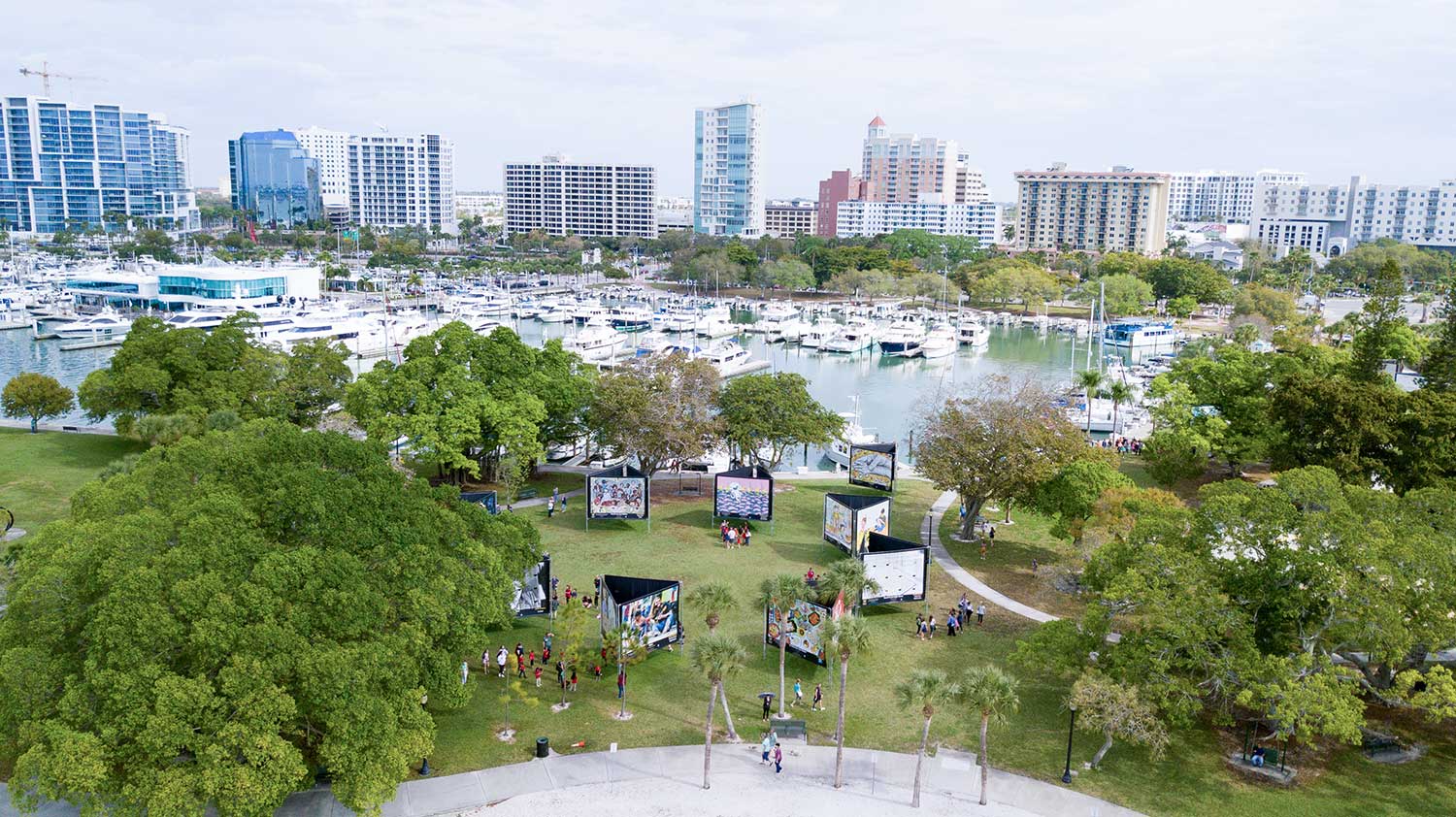 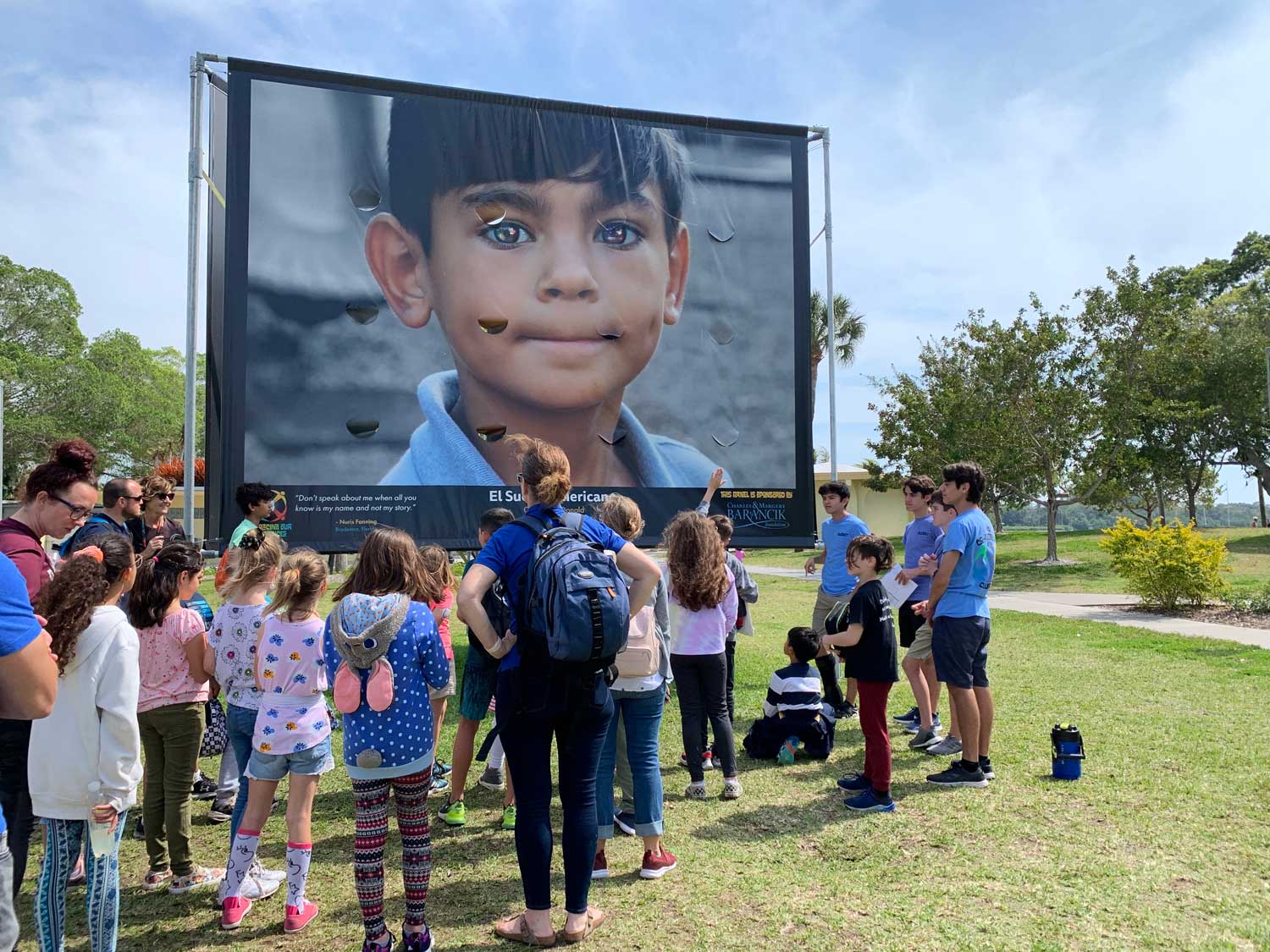 This year’s exhibit had an impressive response to the call for artwork and inspirational quotes, with 16,118 entries pouring in from 127 countries and 50 states. Students from 398 schools around the world submitted artwork or quotes to the juried exhibit, with more than 65% of this year’s submissions coming from students.

Independent evaluations, as well as our own internal evaluations, have consistently shown that teachers rate the Embracing Our Differences’ education initiatives as “outstanding” or “very good” and as “meaningful and beneficial” experiences for their students.

Each year, our sponsors generously provide school buses for students to experience the Embracing Our Differences' art exhibit and participate in diversity education programs with local organizations. This has become a signature of our education efforts with tens of thousands of students benefiting during the past school year.

"I love this experience with my students. These are the lessons that I hope they hold on to as they go through life!"

"I love listening to my students discuss and talk about the art. I love that it helps my class to be more accepting of others. Thank you for this opportunity, and thank you for helping our students embrace our differences."

"My students were extremely appreciative and it broadened their knowledge and cultural capacity immensely."

For the past seven years, Embracing Our Differences has coordinated thousands of volunteers to read to students in Sarasota and Manatee counties. This year, in partnership with the Suncoast Campaign for Grade-Level Reading and an anonymous family foundation, more than 11,600 books selected to stimulate conversations on diversity, bullying, character education and respect for others were provided to local students.

"Thank you so much for coordinating and coming to our class. The kids really took to heart your story. They are still using vocabulary such as ‘that really filled my bucket!’ It is lovely to see them connect with such a great message and practice the ideas in their day-to-day lives."

Under the direction of a trained facilitator, 500 students from all seven Sarasota County public high schools participated in powerful, full-day team-building exercises that encouraged compassion and empathy while fostering inclusive school environments.

"Unity Day was, hands down, the BEST team building/leadership summit I’ve ever attended."

"Unity Day reminded me how important it is to give people the opportunity to speak honestly." 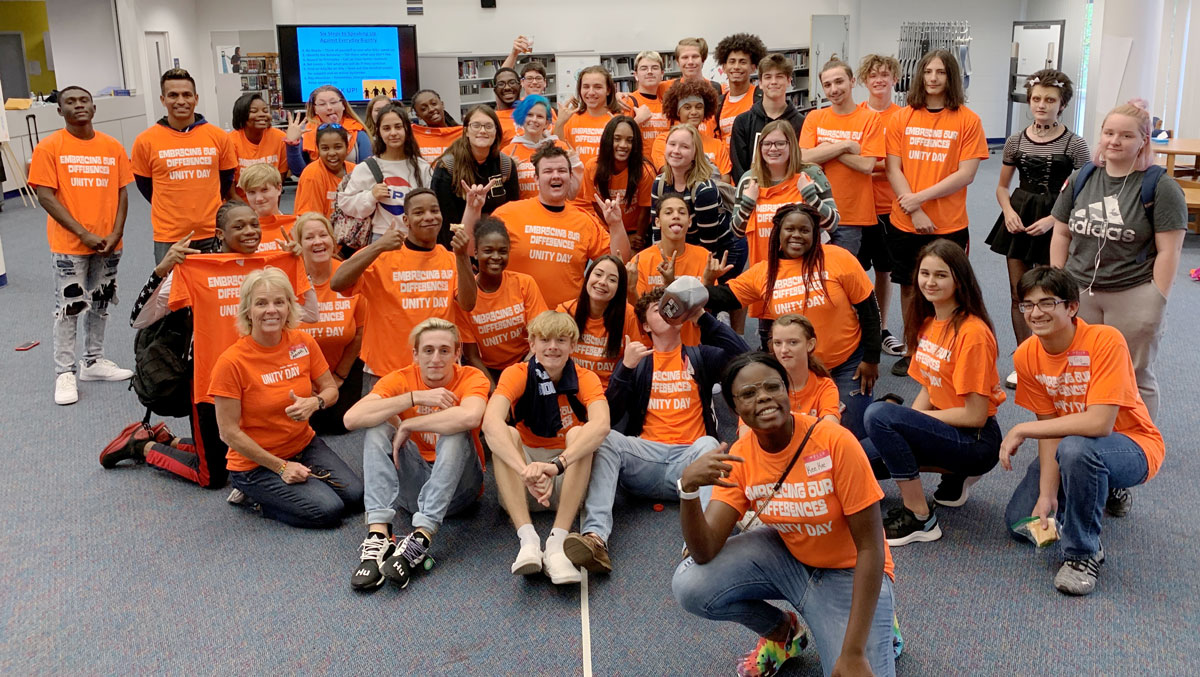 Under the guidance of EOD’s faculty advisor, Dena Sturm, student docents serve as guides for thousands of area elementary, middle and high school students who experience the outdoor exhibit every year, inspiring these young visitors with the life-changing truths of the art and quotes. With their guided questions and planted seeds of inquiry, docents help younger students arrive at realizations of their own about diversity and acceptance.

"Our docent was excellent at explaining the artwork and making it age appropriate for our first graders."

"Our docent was SO AMAZING! She was very articulate, captivated my students’ attention and also had them think deeper about the titles of the artwork and quotes."

Coexistence Clubs consist of dynamic high school students who promote Embracing Our Differences’ vision of creating a world that embraces diversity, respects differences, and actively rejects hatred and prejudice. They accomplish this through various initiatives, including activities that help make their schools a safer and more inclusive environment for everyone.

During the 2019-2020 school year, we maintained active Coexistence Clubs at Booker, North Port, Riverview and Sarasota high schools, and supported the creation of a brand new club at IMG Academy.

This experiential workshop prepared our teachers, guidance counselors and administrators to bring Unity Day programs into their schools, including activities which were used to create a sense of community in the classroom. This program inspired cooperation, communication and empathy, while encouraging students to embrace their similarities and respect their differences.

In response to the COVID-19 pandemic, the 2020 Art Intensive took place virtually. Forty-one visual art teachers participated over two days, engaging in six powerful presentations and interactive lessons geared toward inspiring and reinvigorating our teachers, as well as tackling current challenges in the field. Collectively, this year’s participants are responsible for more than 12,700 students in Sarasota, Manatee and Charlotte counties.

"This was a good blend of philosophy and practical application. I was able to relate to each of the presenters, and I feel inspired and energized to work with my students to create transformative art. Thank you!"

"Thank you for adapting to meet the needs of the teachers this year."

Each fall, thousands of students in Sarasota and Manatee counties spend time creating art and quotations for submission to our annual exhibition. Each student benefits by engaging in a comprehensive approach to critical thinking and visual inquiry that provides a safe and healthy means of clarifying their own identities. It also helps them develop an enhanced sense of self-esteem and social skills. Developing new and different perspectives from their peers is an added bonus.

Interactive student participation is one of the most effective delivery methods for the often difficult and abstract concepts of diversity and inclusion. Prepared under the supervision of curriculum development specialists from the Sarasota County School district, the age-appropriate lesson plans identify the relevant curriculum standards, educational objectives, instructional strategies and assessment guidelines.

"Oh, my goodness! I can't believe how truly RICH the resources are for regular classroom teachers without extensive art training...I plan to continue integrating art into my classroom in order to teach how to SEE, how to OBSERVE and how to APPRECIATE art (and the world around them)." 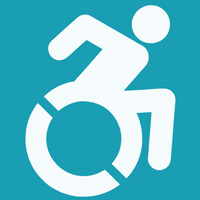 We invite you to participate in creating a society that is more inclusive. Every contribution, no matter how big or small, will help create a vibrant community that is safe and inclusive for all, where differences are embraced and individuality is celebrated.

Fund the creation of diversity and inclusion curriculum for the current school year!

Provide 5 classrooms interactive workbooks to use before, during and after their field trip!